Kazakhstan - 30 years of independence and 15 years of 'Borat' 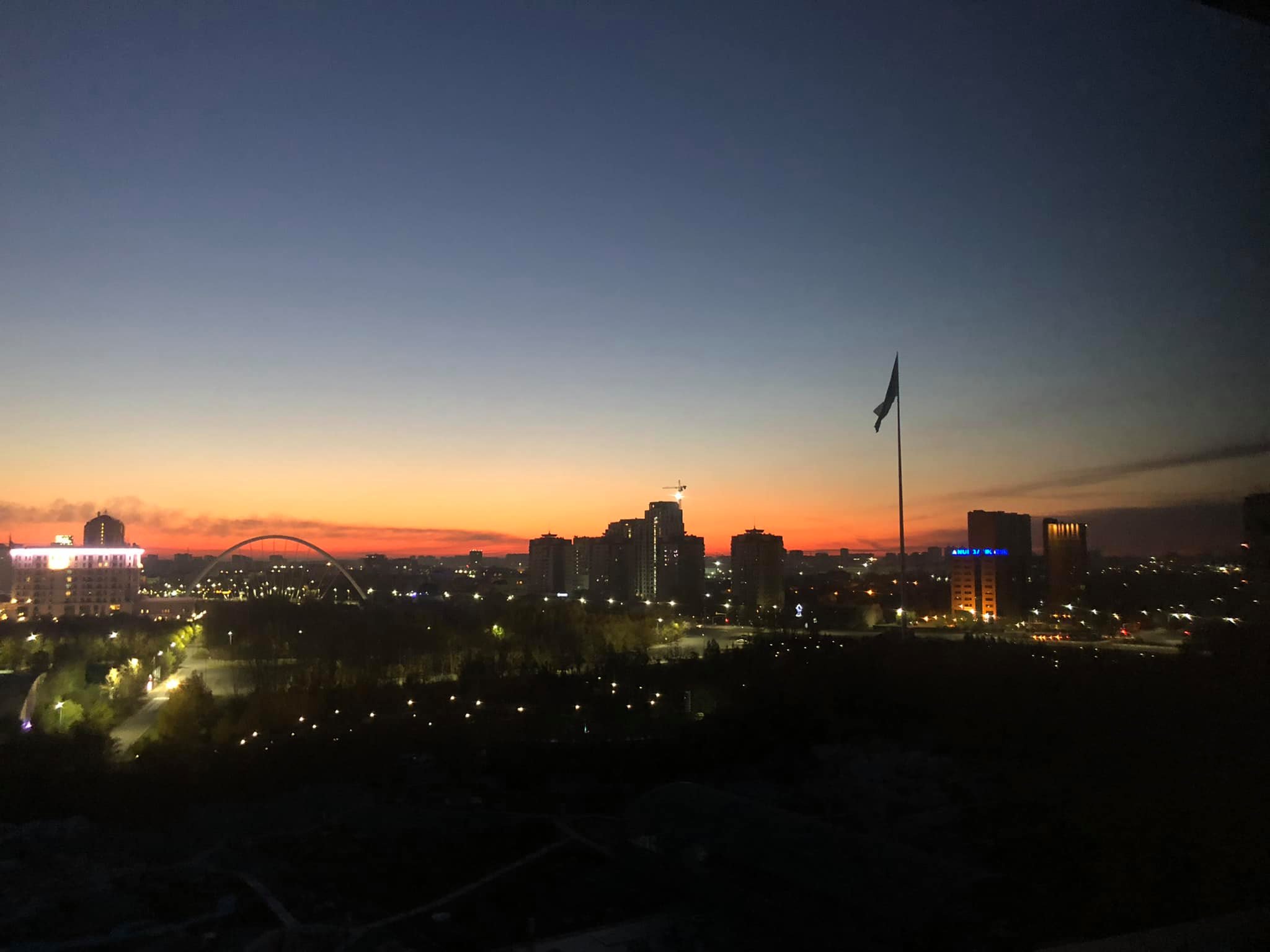 “Please don’t mention Borat!” begged the press officer as we set off for Kazakhstan in October 2021 to see how this oil-rich nation of 19 million people - richer than all its central Asian neighbours put together – was celebrating the 30th anniversary of its independence from the Soviet Union.

Touching down in the capital Nur-Sultan, renamed from Astana in honour of President Nursultan Nazarbayev in 2019, there are no horses and carts in the streets, no men in mankinis, nobody voicing outrageously sexist, homophobic, anti-Semitic sentiments during our four-day visit.

Of course, when you invite a group of journalists to your country, you’ll show them the best side possible. So were there any echoes of Sacha Baron Cohen’s infamous comedy, released in 2006 – exactly half way through independent Kazakhstan’s 30 year existence?

Young, highly-educated, English-speaking guides took us around this gleaming metropolis of offices, universities and arts venues, explaining how the country is pursuing its target: to be among the top 30 global economies by 2050 (it’s currently 54th, says the World Bank).

Early in the film, Borat nods to this fixation with rankings. His sister is “number four prostitute in all of Kazakhstan”. Explaining his mission, he says: “America is known for its sense of humor. UN survey say Kazakhstan have 98th lowest humor. We must improve.”

The joke here is that Americans are famously humourless, incapable of understanding satire or irony. The movie uses Borat’s ignorance to expose this failing to hysterical effect. As one real Kazakh journalist wrote, the film is “certainly not anti-Kazakh…but rather cruelly anti-American…amazingly funny and sad at the same time.”

Our first visit was to a workshop where adults with Down Syndrome made children’s toys. The project director Emin Askerov described the participants: “We have people with mental disabilities, criminals… and single mothers.” In Central Asia, single mothers are indeed socially vulnerable, but there’s an echo of Borat: “Although Kazakhstan a glorious country, it have a problem, too: economic, social, and Jew.”

Next we met with Yerzhan Saltybayev, Director of the Institute of World Economics and Politics, who explained how Kazakhstan gave up its nuclear arsenal in return for investment in the massive Tengiz oil field – the source of much of its wealth for the past 30 years. The country allied itself with Belarus and the Ukraine, all forging their own post-Soviet identity.

With Belarus and Ukraine in political turmoil, is this a club you really want to join?

“We are trying to be Switzerland in Eurasia,” he said, arguing that Kazakhstan’s warm relations with Russia, China and the EU puts it in a strong geopolitical position. Kazakhstan is physically massive: more than 3 million square kilometres, the equivalent of seven UKs.

But is this realpolitik or a deluded sense of Kazakhstan’s importance? The “…greatest country in the world,” as Borat sang at a rodeo in Salem, Virginia. “All other countries are run by little girls… Kazakhstan friend of all except Uzbekistan, They very nosey people, with bone in their brain.”

So even if Kazakhstan is indeed a friend of all (even Uzbekistan), is it a friend of democracy?

“We feel that independence is more important than democracy,” said Saltybayev. “We are surrounded by countries that are multiple times larger in population, in economy, in their military. Then you look at a country like Turkmenistan, with a multiparty system. It’s had four revolutions. It’s not a functional democracy.”

The autocratic presidency of Nursultan Nazarbayev ran from pre-independence in 1990 until March 2019, when he stepped down in favour of former Prime Minister Kassym Jomart Tokayev. In that time, Nazarbayev nurtured a cult of personality on a par with Chairman Mao or Kim Jong-il. Today, his image adorns the city renamed in his honour, with streets, universities and foundations bearing his name.

Such solipsism has rich comic potential, mirrored in ‘Borat’. His faith in the literal power of metaphor (“Where is the pussy magnet?”) and belief that the world will shape itself to his will (Pamela Anderson will inevitably marry him) chimes with Nazarbayev’s conviction that Kazakhstan is destined for global greatness.

In pursuit of this model society, Nazarbayev sent off dozens of young students to the great universities of the world, to Harvard and Princeton, to Oxford and Cambridge, under the Bolashaq programme. There are now hundreds of Bolashaq graduates back in Kazakhstan, repaying the national investment in their education.

In his own way, Borat is a Bolashaq student. Determined to glean the ‘Cultural Learnings of America for Make Benefit Glorious Nation of Kazakhstan’, he exposes Americans’ pompous notion that their culture should be a model for anyone. The actual Bolashaq students return with master’s degrees in law, politics, medicine or engineering, underpinning a genuine upsurge in economic performance and subtly Westernising their country through an embrace of digital technology, modern business practices and high culture. The Nur-Sultan opera house is a splendid example of its type.

Borat, by contrast, is really a throwback to post-Soviet boorishness, conspicuous consumption and the mindless aping of Western culture – mid-1990s Moscow rather than anywhere in Central Asia. His Kazakh identity is random and gratuitous, when you compare him to actual Kazakhs. Everyone we met, from our driver to the waiters in restaurants, to students and businesspeople, was courteous and attentive, polite and respectful.

As an administrative capital, Nur-Sultan is the country’s Canberra or Washington DC, so doubtless there are earthier types in the regions. A strict hierarchy of attainment keeps it exclusive and well-mannered. Even so, if you only knew about Kazakhstan from watching Borat, you’d be astonished by the Nazarbayev University site, opened in 2010 with a vast dowry to fund advanced research: it currently educates 300 PhD students. Or the 120-acre Astana Business Campus, with dozens of high-tech start-ups devising whizzy digital solutions.

This mini-Silicon Valley is clearly inspired by the Californian original, just as the Astana International Finance Centre is based on Dubai’s IFC. Kazakhstan has borrowed smart ideas from all over, trying, like so many other petro-states, to diversify out of oil and gas before the whole polluting, super-lucrative mess dries up.

As if to erase forever Borat’s impression of Kazakhs demeaning others, we visited the Qamqorlyk clinic, where children with cerebral palsy enjoy a wonderland of playrooms, therapy chambers, music and dance machines, sensory and physical stimulation, education and attention. To our surprise and delight, we were treated to a gala performance of song and dance, including an infant boy’s first ever steps, then showered with party food and drink. Kazakhstan’s oil billions have seeped their way into the fabric of the nation, raising conditions for even the lowliest citizens.

Borat’s depiction of subservient, sexually-abused Kazakh women with “the brain of a squirrel”, could not be further from the truth. Half of the business leaders we met were women, smartly suited, confident, happily taking decisions on behalf of others.

Perhaps this equality connects to Nursultan Nazarbayev’s family life: the Father of the Nation had three daughters and no sons, each of them forging careers in politics, business or international relations. The eldest, Dariga, enjoyed high political office until May 2020, when new President Tokayev sacked her as chair of the Senate. Second daughter Dinara has a multi-billion-dollar fortune, while the youngest, Aliya, married the son of the President of neighbouring Kyrgyzstan. None of them would take kindly to be told to “Smile, pussycat!” as Borat tells a group of American feminists, or submit to the ‘wedding sack’ that he prepares for Pamela Anderson.

More likely, today’s Kazakh women are working for a tech start up, creating an app to identify disease from the sound of a cough. Or at the Green Finance Centre, investing in renewable energy bonds, pursuing Kazakhstan’s pledge to become carbon neutral by 2060.

On our final night, as we feasted on horsemeat in a sumptuous restaurant on the 18th floor of a Nur-Sultan skyscraper, hosted by further high-powered Kazakh women, the capital’s traffic swarmed beneath us in the chilly autumn air. Soon the temperature would drop to minus 30 as Kazakhstan entered its annual winter freeze.

So we made it through the whole trip without once mentioning the ‘B word’.

Kazakhstan, however, went into political tumult just a few months after our trip, with riots on the streets followed by a brutal crack-down by the authorities. It then supported Russia in its invasion of Ukraine, earning pariah status among democratic nations.

You can only hope that the enormous progress achieved in recent years is not squandered by the country’s leaders, forced to side with Putin in his insane war.