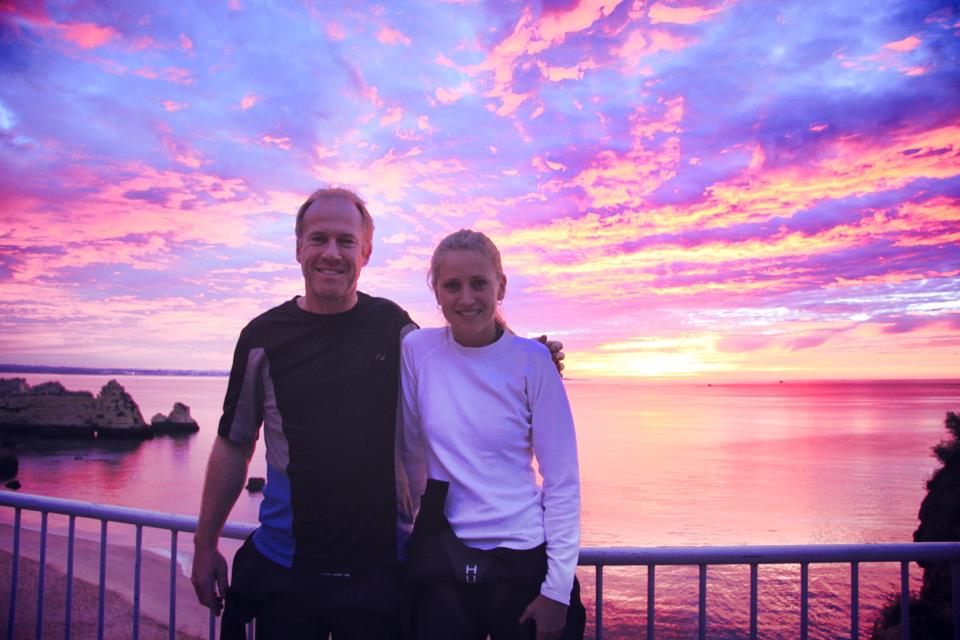 Sitting by the pool in Lagos, Portugal after a long bike ride.

“You should do an Ironman,” said Paul Reidy.

“It’s not that hard. Just do a couple of 70.3 races next year and then work up to Ironman after that.”

So began a journey into triathlon addiction, from IM Austria (aged 52) to selection for the GB National age group team and finally qualification for the Ironman World Championship in St George, Utah, in 2022. Completing that race was one of the best moments of my life.

Through the whole story, Embrace Sports has been a constant source of support, friendship and inspiration. Paul was just one of dozens of people I’ve met at camps in Lagos and the French Alps, people very much like me.

That’s the amazing thing: there are occasional superstars, but most guests are regular, average people: a bit overweight maybe, slower than they used to be (or would like to be) yet determined to make the best of themselves through sport.

Coaches Neil Aitken, Alan Scott and Graeme Buscke tutored me through the physical, technical and mental aspects of triathlon, always positive and encouraging, happy to share their experiences and provide the best possible environment to progress.

At first, I was, like many debut guests, a bit of a mess. I fell off my bike when wearing cleats, struggled to cycle up Monchique, walked the last km of the woodland trail and barely managed to swim round the shark fin at Donna Ana beach in Lagos.

Over the years, these challenges have become routine. These days a 100km ride is a picnic, after years of climbing Alpe d’Huez, Col de la Madeleine and many others on Embrace camps. Last year I ran three laps of the 8km woodland trail in Portugal and buzzed around the 400m shark fin loop three times for fun.

In a single year I completed Ironman races in Lanzarote and Wales, Triathlon Alpe d’Huez and raced for Great Britain at the European Championships in Romania. The change in my lifestyle, outlook and physique has shocked my friends and family.

Here are five things that training with Embrace has taught me:

From the Punisher, the woodland trail and ‘Hell on the hills’ in Lagos to the soaring peaks of the French Alps, Neil and the team have urged, cajoled, inspired and led me up countless inclines. The rewards are astonishing.

Each evening after a day’s training, Embrace leaders talk through what we’ve been doing, how we coped with it, what we can learn. This is an excellent habit: it encourages you to take stock, celebrate improvements (or even just how good a session felt) and how your training fits into your plan.

When I first arrived at Giramar in Portugal, in October 2013, the TV was showing some mad triathlon event somewhere miles away. I thought it was odd – weren’t we here to get away from TVs and screens, to spend time in the open air? “What’s that?” I asked. “It’s Kona,” said Alan Scott (later to smash that extraordinary course in 9 hrs 43 mins). So began a love and fascination for Ironman racing, and the sport of triathlon generally, with all the intrigue, wonder and devotion that it inspires.

Embrace welcomes all sorts, from the novice to the elite, and it’s a constant joy to see how both coaches and campers take pleasure in each other’s highs and commiserate with their lows. This worldwide family of athletes, loosely connected through their shared Embrace history, stay in touch – mainly through social media - in a wonderfully supportive way. Triathlon has to be the world’s friendliest sport, and Embrace opened its doors to me.

That initial conversation about Ironman was just one of many that have prompted me to tackle tougher challenges, set my ambitions higher and believe in myself. I’ll never run a 2.35 marathon like Neil, swim at 1.20 per 100m like Alan or bike above 50kmph like Graeme, but in Ironman races I’ve swum 1 hour 03, biked 5 hours 40, run a 4 hour 40 marathon and finished in under 12 hours. For someone with no athletic background, these are nice results.

So thanks very much Embrace, I’m really grateful for all the lessons, the camaraderie, the challenges and the food (never forget the food!). The coaches have been role models, not only in their sporting achievements but in their approach to training, racing and in how they treat other people.

Long may you encourage and inspire generations of campers to better themselves and to achieve goals that they never believed possible.