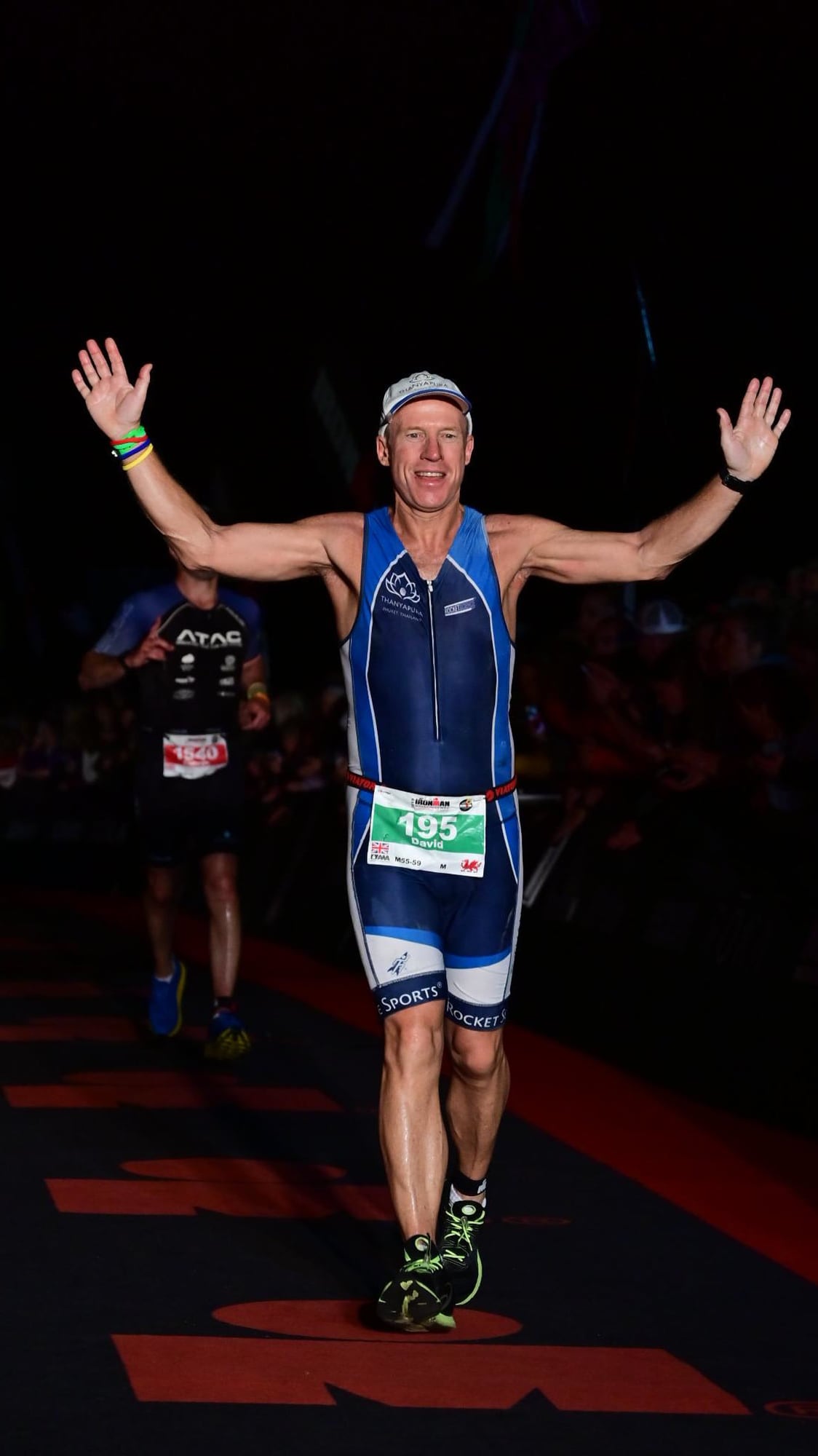 In the run up to this race, I felt fitter, stronger and faster than ever, really well prepared physically and mentally. The logistics were great – ideal place to stay, kit all in good shape, just the right gap from altitude training and well rested.

Seeded myself on 1.10. As soon as I hit the water, I felt relaxed and powerful, swimming fast and with a strong stroke, no concerns over temperature, sea conditions or other competitors. Was happier to swim on my own rather than draft because I trusted my sighting more than theirs and felt my speed was good enough.

The first buoy arrived quicker than expected and then the current took me across the bay, finishing the first loop in 36 minutes, so around my fastest 70.3 swim time. Could see I’d swum just over 2000m but I knew I’d kept to the course, so figured it was a bit long.

Same story on loop two, all fine. Came out in 1.13 feeling great, ready for anything. Several other people on Facebook said they registered 4.2km for the swim, despite keeping to the course.

What’s really pleasing is my average speed, which was 1.47/100m. Maybe this was helped by the current, but I’m super happy to feel that my swim is improving, and the many kms of training over this summer are paying off. Big bonus for the future.

Started off quite conservatively, feeling my way into the course, trying not to race other people (sometimes hard to resist). Thighs burned a little on the early climbs, so eased off a bit. Gradually picked up speed and confidence, helped by riding with some strong people. Looking back to IM Lanzarote this year, it was quite a contrast. There, I was surrounded by weak riders and felt they were holding me back. Here, we supported each other, pushing up the hills, speeding down the descents, great bike handling and intensity.

Pleased with average speed as we came up to the end of the first loop, not much below 30kmph. Hoped to be on target for 6.15 split. Although average speed dipped slightly on the second loop, I was noticeably stronger than the riders around me. Burned off a couple of 55-59 AG men who had been buzzing around me all day. Flew up Wisemans Bridge and the other late climbs and into Tenby feeling fine. Nice to see plenty of empty racks in transition! Discovered I was 10th in my age group out of 120.

Quick T2 then out into the screaming crowds. Pleased to find that the top pros were still running: they’ve usually finished by the time I start. Trotting along nicely, averaging 6kmph, body relaxed, plenty of energy. Definitely not pushing too hard.

Completed first 10.5 loop in an hour, which was my plan, and ran back up the hill still feeling good, pace almost the same as first loop. Back down in town, approaching 21km, two things happened. My heart started to ache every minute or so and my groin started to seize up. So I eased back and the heart issue went away but the groin and upper thigh tightness carried on. What to do? I’d already eaten 4 salt tablets through the race and was concerned that taking any more might not be good for my heart. I’d drunk at least 7 or 8 litres of liquid, so I wasn’t dehydrated.

Anyway, this tightness carried on pretty much throughout the rest of the race – slightly less going downhill. Basically slowed me to 9 minutes/km and meant I ended up running 5.20 for the marathon to end on 13.33.

The second half of the run was my only frustration and regret of the race. I had plenty of energy, motivation and intensity left, but my body was unwilling to cooperate.