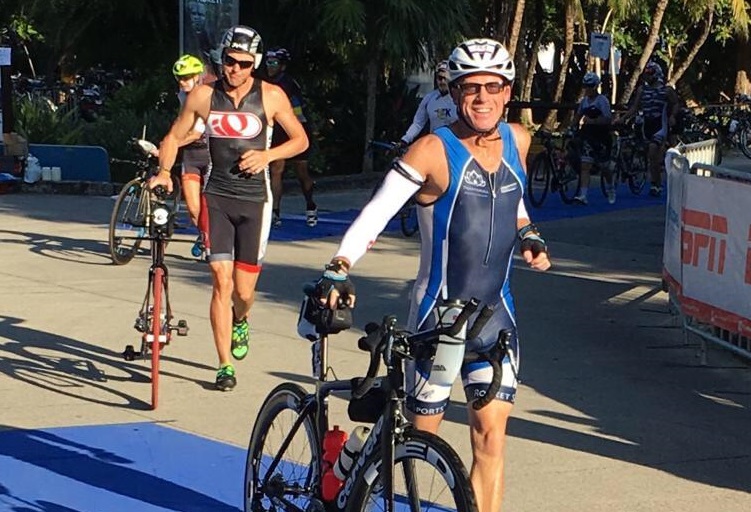 Caressed by the Caribbean Sea, fringed by palms, blessed with golden beaches, Cozumel is Mexico’s treasure island, just a short hop from Playa del Carmen on the Yucatan Peninsula.

At some exotic race locations, I’m torn between sport and leisure. Why not sit by the pool and order a cocktail?

Somehow Cozumel was different. Riding on its flat, smooth roads was sheer pleasure. Swimming in its crystal waters could not have been nicer. Even running along its hot, busy streets, lit by the day-glow shirts of American tourists, was invigorating.

After a couple of weeks on the island in preparation, I was absolutely in the mood for the race. I had the best feeling about it.

Diving into the sea from a jetty, I sped northwards along the coast, swept along by an unseen current. I knew it existed, but couldn’t feel a difference. What was different was my time: 1 hour 3 minutes – way faster than my regular swim. I leapt out of the water with a big smile and sprinted into transition.

Whoosh! Off I rode on the first of three laps of the island, overtaking competitors by the dozen, feeling a brief gust as former Ironman World Champion Sebastian Kienle breezed past at 50kmph. The ride was like one long video game, like the opening credits of Star Wars, stars and planets fizzing past.

On the run I set off like a greyhound and carried on at high speed for the first 20km, only slowing as my glucose reserves depleted and the heat began to eat into my bones. I’d promised my son Raffy that I’d finish in under 12 hours – could it really happen?

Spurred on by coke, coffee, gels and adrenaline, I raced down the promenade for the last time and finished in 11 hours 49 minutes and 59 seconds – a personal best by 53 minutes.