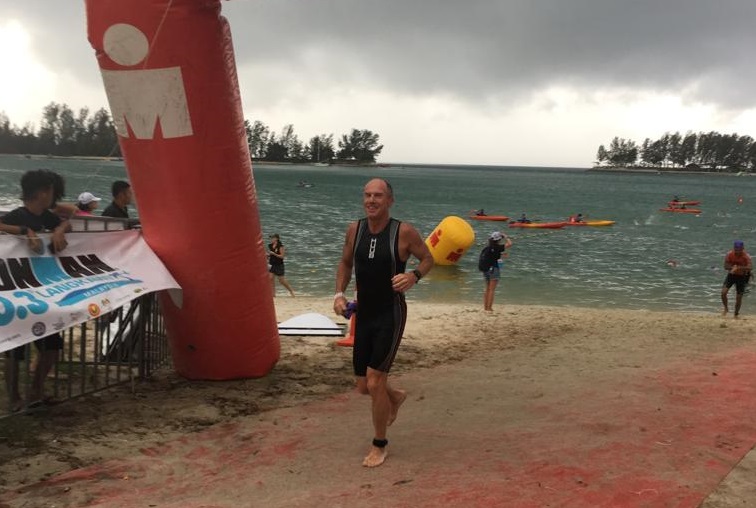 So Ironman Malaysia was indeed stormy, in all kinds of ways. A huge tropical gale swept in during the swim - slower people were fished out of the water and taken to transition - and we set off on the bike in torrential rain. There were ambulances tearing along the narrow roads straight away and seven people ended up in hospital with broken collar bones.

For me, all was fine until 90km when my shifter broke. A bike mechanic on the course said ‘oh shit’ as he spotted the corroded cable. So I had to ride the second half in one high gear, which made the many hills a furious fight.

So after a battling 1 hr 28 swim in 29-degree temperature seas, which was like running in a sheepskin coat, and cycling around the sapping hills of this beautiful island in the ferocious midday heat, we hit the shimmering pavements for the most brutal test of the day.

Despite hydrating constantly and eating all the right stuff, cooling myself at every aid station and walking to reduce my heart rate, by 30km I started cramping - legs, stomach, even hands (!) - and at 35km I fainted. Medics rushed to help me and pulled me to my feet, but I promptly fainted again and woke to hear a doctor tell me my race was over and I was carted off to hospital. Think it could have been hyponatremia, where your salt levels get so low that you lose consciousness.

Terribly disappointed to get within seven km of the finish line in such an awesome race, with some competitors describing it as ‘harder than Kona’. Was held overnight for tests and released the next day, grateful to all the professionals who leapt into action to save me.

Finally, huge congratulations to Federica De Nicola for her magnificent 9hr 57 performance for third spot on the podium in her first year as a young pro. What a star she is! She showed us how to ride the storm.