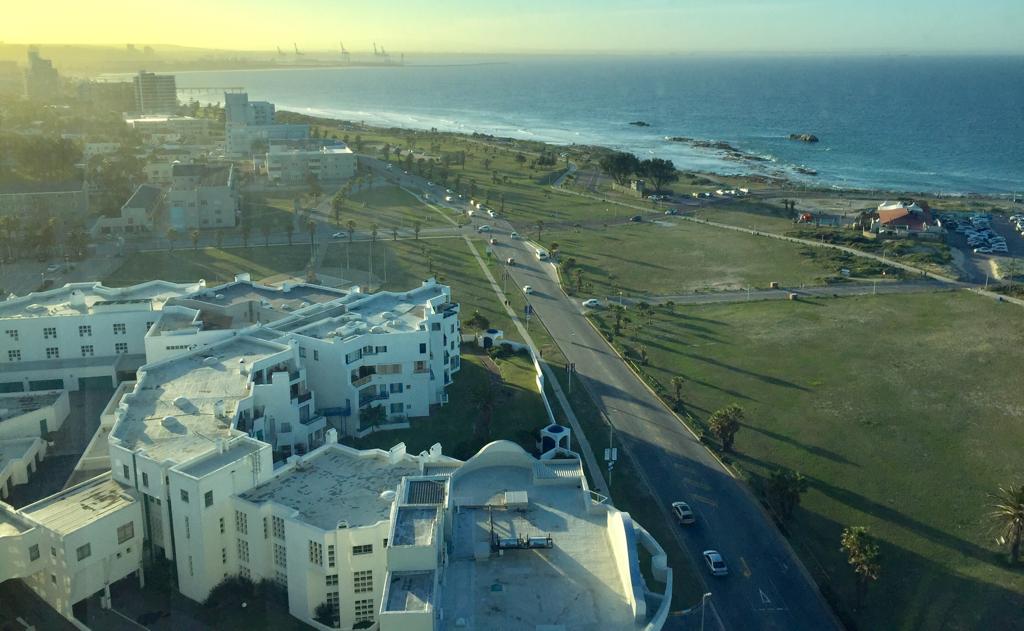 Undeterred, the organisers of this year’s Ironman African Championship pressed ahead with the event on Sunday, sending 2,000 athletes into the Bay dressed in black neoprene, closely resembling the Great White’s favourite prey – the seal.

As far as we know, the shark was a DNS (Did Not Start), and all competitors made it out alive. The sea was unusually calm, the water relatively warm and a golden sunrise bathed the beach and pier as we headed into the Indian Ocean.

It was one of my favourite Ironman swims: clear enough to draft other swimmers, with the warm sun above my right arm and easy sighting. I came out of the 3,800m swim in 1 hour 16 minutes, five minutes better than my normal time, bang on 2 minutes per 100m.

Out on the 180km bike course, we had a light tailwind for the first 45km, making for rapid progress. It’s a stunning ride, taking you along a rugged, rocky, surf-fringed coastline, through nature reserves and pine forests to the tiny village of Seaview, where you turn around and come back.

The two-loop bike means you return to Port Elizabeth and then head out again, having battled the wind coming back, which was freshening with each passing hour. I made the half-way mark in 2 hours 45, on schedule for a 5.30 split, enjoying the challenge, feeling strong and fast.

This carried on pretty much through to the end of the bike leg, except that the wind on the second loop was noticeably fiercer, the heat was rising and the rattling road became more uncomfortable. Ended up on 5 hours 47, relieved that I hadn’t joined the dozen or so people struggling by the roadside with punctures or other mechanicals. This turned out to be the 14th-fastest time in my age group of 97 athletes.

A quick back and shoulder rub with sunscreen from one of the many volunteers and we were out on the run course – four loops of Marine Drive, running along the front of Port Elizabeth’s upmarket Summerstrand.

Basically flat, with thousands of enthused, vocal, friendly spectators, it’s a lovely course. I started off at an easy pace of 6 minutes per km, aiming to hold this for the whole race. For a while, all went well. Armed with a water bottle, I could hydrate between aid stations. The leading pros were just finishing, so there was great excitement that a local guy from Port Elizabeth – Kyle Buckingham - won the men’s race.

Rappers improvised songs about the competitors, smoke from barbeques (‘braai’) drifted across the route, families sat and picnicked, cheerleaders danced, groups of men offered beer and champagne to the runners and there was a joyous, festive feel to the whole event.

The stress of the bike and the blazing African sun started to tell on my legs after about an hour. The perennial IM runner’s doubts welled up: ‘Can I really finish this?’ ‘Am I going to collapse?’ ‘Why the hell am I putting myself through this agony?!’ But they were always replaced by a surge of confidence and well-being as I spotted wife Clare, had a shot of coffee, or thought of my training mates and coach Rafal, who was also out racing with his wife Alicja.

With about three km to go, I thought: “I’ve just swum 3.8km in the gorgeous Indian Ocean, cycled 180km through the African bush and run 39km under the searing African sun. What a privilege and adventure!” So I jogged on to the red carpet for a 5 hour marathon split where Clare was waiting to present my medal, happy to have escaped the Great White shark, emerged shaken but unharmed from the bike and with a creditable 12:15:49 finishing time, 26th out of 97 in my age group.

Thank you Port Elizabeth, it was an epic day.