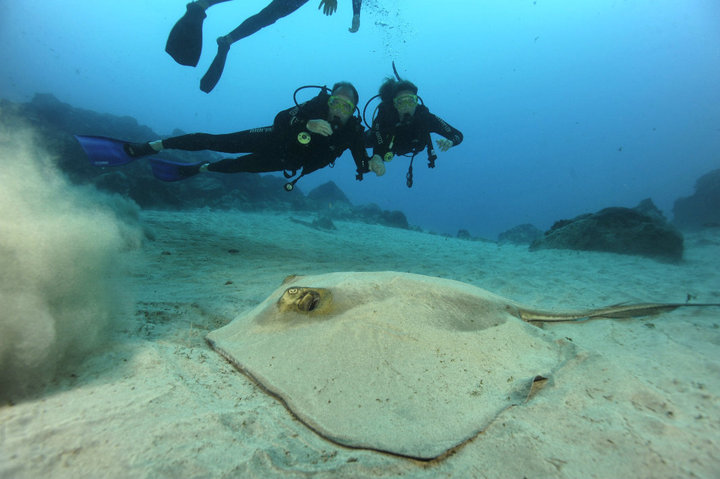 As we swam towards the huge dark cave, a wide, flat shape appeared on the sandy floor of the sea. Twenty metres above us, waves rolled and crashed into high cliffs.

The shape moved! All at once we realised it was a giant stingray, lying peacefully at the entrance to the cave. We floated above it, awestruck at its quiet power and beauty.

Earlier on this dive, on the coast of a small Brazilian island called Fernando de Noronha set in the tropical Atlantic, we had drifted over coral towers, seen long, thin barracudas and reef sharks, dived through crazy-shaped rock formations and been surrounded by shoals of brightly coloured yellow and blue surgeon fish. The stingray was simply the climax of an adventure among an incredible natural abundance.

Fernando de Noronha, like so many destinations in Brazil, is packed with wildlife. Turtles nest along its unsurpassed beaches (we once saw more than a dozen while we snorkeled above them). Dolphins congregate in its wide, palm-fringed bays.  Exotic birds nest on its cliff-tops and circle lazily overhead as you walk down to the golden sands and turquoise seas of this piece of paradise.

Once fought over by the French, Dutch and Portuguese, the island is now firmly Brazilian and reminds me in some ways of Goa. There are ruined fortresses at strategic points overlooking the sea, isolated beaches that can only be reached on foot – one of them includes a hair-raising vertical descent on a rusty ladder. There is delicious food, served by smiling staff at thatched beachfront cafes, featuring shrimp, local fish and rice.

Yet there is one major difference. The Brazilian government has forbidden large scale development of any kind. International resorts are banned. There is no Sheraton, no Hilton, no Four Seasons. Instead, there are tiny ‘pousadas’ (guest houses) which typically have no more than four or five rooms. They range from basic, with shared bathrooms and no air conditioning, through to high luxury, costing hundreds of dollars per night, with swimming pools and gourmet restaurants.

The entire island is a national park, with restrictions not only on development but on visitor figures. Only a handful of planes land here each week and all visitors must pay a daily tax to help preserve the island’s unique natural heritage. As a result, it makes the most wonderfully relaxing place to stay. There is only one main road, although you can hire motorised buggies and drive them off down muddy tracks to the beaches.

The main town (more of a village) is Vila dos Remedios, where you can buy tee shirts and mementos from roadside stalls, book your next diving expedition, then have a beer and a shrimp curry in the evening before returning to your pousada. Towering 320 metres above the island is the dramatic basalt finger of Morro do Pico, while to the southwest of the island are the ‘two brothers’ – twin mini islands just offshore, providing a breathtakingly beautiful seascape.

From the bottom of the sea to the peaks of its cliffs, Fernando do Noronha is a tiny piece of heaven.